We may earn money or products from the companies mentioned in this post. You can read full disclaimer below. 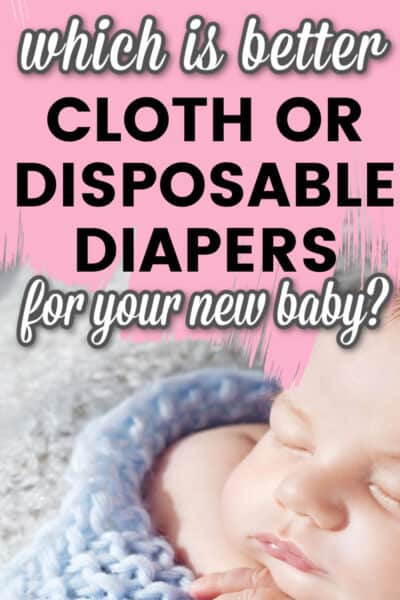 Which is better disposable or cloth diapers?

Let’s talk about the pros vs cons of both and see which one fits your lifestyle best.

Deciding between cloth vs disposable diapers for your infant can be a tough choice.

Modern cloth diapers come in a variety of colors, fabrics, and styles, each with its own unique selling points.

Add in the dozens of cloth diaper accessories on the market, and it’s no surprise that choosing and purchasing cloth diapers or disposables can be a daunting task for parents.

There are pros and cons to both cloth diapers and disposable diapers.

Which is better disposable or cloth diapers? [Pros vs Cons]

The sheer number of diapers, your baby will use can save money, but not as much as one might think.

Many parents on a budget have done a cost analysis comparing cloth versus disposable diapers and though cloth diapers are less expensive overall, the savings in cost can be off-set by a number of factors.

Protecting the environment is a common reason many parents use cloth diapers.  a big difference between cloth and disposable diapers, might not be as significant as you would think.

When deciding on cloth vs disposable diapers for your infant, considering which is more eco-friendly actually requires a little research.

Disposables are almost always considered to be the worst for the environment.

This is understandable based on the fact that just in the United States, approximately 20 billion disposable diapers are used each year which amounts to 3.5 million tons of waste discarded in landfills.

Con: The impact of cloth diapers on the environment

When analyzing cost it is necessary to put aside the environmental concerns as we will discuss those later.

There may not be a significant difference in cost depending on utility costs in your location.

This means your decision might come down to environmental concerns. 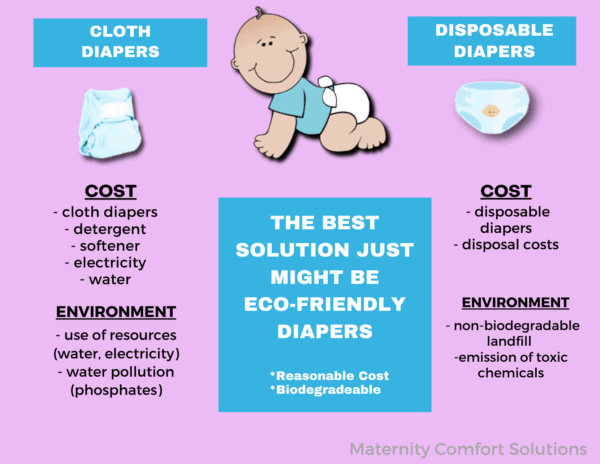 Note: Simply based on the above comparison and the fact that the vast majority of parents use disposable diapers,  what may be a good choice is to use bamboo diapers.

Pro: Cloth diapers are more comfortable for the baby.

Some parents use cloth diapers because they are more comfortable.

There is no doubt cloth diapers are softer and more comfortable when first applied.

But the benefit should take into account how long a soiled diaper is going to stay in contact with your baby’s skin.

Both parents and pediatricians who are familiar with both cloth and disposable diapers agree the cloth diapers can be more prone to causing diaper rash.

Granted, this concern is largely related to how long an infant is going to remain in a wet or soiled diaper. 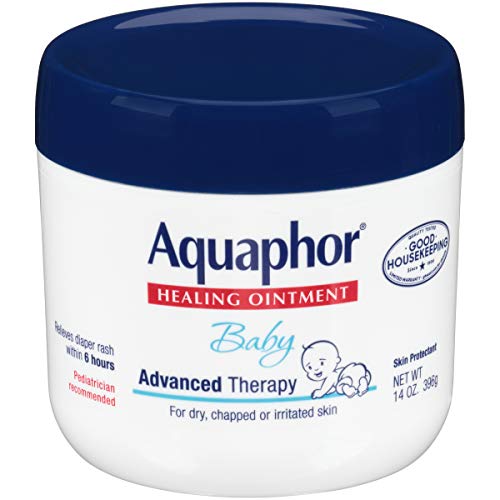 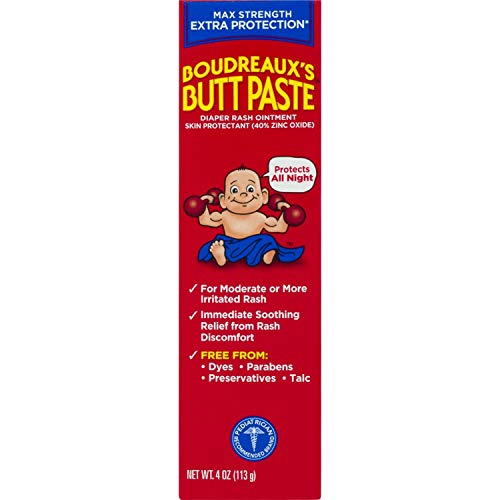 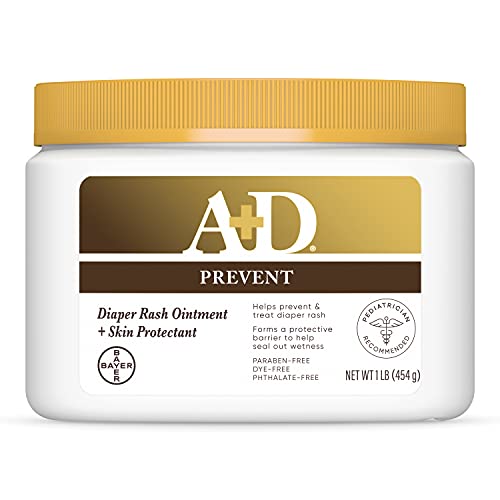 Lastly, for some parents, deciding what is best might simply come down to practical issues.

Some of these include:

There are a few eco-friendly diapers that seem to be making a difference.

But as is often seen with organic and eco-friendly products they can be more expensive.

Since the most common disposable diapers have an outer plastic layer, the concern among those who prefer cloth diapers is the fact that they are not biodegradable.

As a result, they can only be disposed of in landfills. It is estimated to take 500 years for the plastic to decompose.

The development of eco-friendly diapers is continuing to evolve and seems to have a promising future.

Some have developed to the point of no longer being classified as landfill waste.

Because of the design of disposable diapers, moisture is absorbed and wicked away from your baby’s skin resulting in less

irritation. This is helpful for baby’s who have sensitive skin and are prone to diaper rash.

But as is the case with cloth diapers, the best way to prevent diaper rash is to limit the duration of time your baby

stays in a wet or soiled diaper.

Pro: The convenience of disposable diapers:

With the comparison of cost and environmental impact being minimal (particularly with eco-friendly diapers), many parents, the convenience of disposable diapers can be a significant factor:

There is a trend towards cloth diapers, but the savings and effect on the environment are not as compelling as one might think at first glance.

Prefolds consist of several layers of material sewn together to form a three-paneled rectangle. The middle panel generally has double the number of layers as the two edge panels.

They are also simpler to use than flats while remaining very affordable, also around $3 to $10.

Both contoured and fitted cloth diapers are made of layers of fabric sewn into an hourglass shape, sometimes with elastic included around the waistband and leg openings.

As with flats and pre-folds, a separate diaper cover is required when using these cloth diapers.

Contours and fitted cloth diapers generally range between $10 and $20.

Pocket cloth diapers are considered by many to be as easy to put on as disposables.

They are also fairly easy to clean, do a good job of keeping moisture away from the baby’s bottom, and come in a variety of patterns and colors.

A pocket cloth diaper consists of two pieces: a cloth diaper cover with a waterproof outer layer and soft inner, and a separate insert made of absorbent material.

The insert is placed in the “pocket” of the cover through an opening in the back.

It is recommended that soiled inserts and covers for pocket cloth diapers be stored and washed separately.

These diapers are also a bit more expensive, ranging from $15 to $25 each.

Like pocket diapers, all-in-ones come in a variety of colors and patterns and do not require the use of a separate diaper cover.

Of all cloth diapers, they are the easiest to use, but they are also the most expensive (around $20 to $30).

diapers and all-in-ones. They are available in both wrap and pull-on styles and can be made of a number of materials, including

Liners are single layer pieces of fabric used to help keep the baby dry, make it easier to clean messy diapers and keep creams and medications from coming in contact with the diaper.

Both reusable and disposable liners are available.

Diaper pails are used to store wet or soiled diapers until they can be washed.

They can range from a simple wastebasket to an air-tight container and lid.

Wet/dry bags are waterproof tote bags that can be used in place of a diaper pail or even to line a diaper pail, making it easier to

transport the soiled diapers to the laundry room. They also work well when traveling.

There are many types of fasteners.

So how do you decide whether to choose cloth vs disposable diapers?

For starters, once you have researched and compared the pros and cons of cloth vs disposable diapers the decision is ultimately yours!

You will get a lot of advice from family, friends, and colleagues, but the only opinion that matters is yours.

Never allow yourself to feel pressured or guilty because of what others have to say.

Keep in mind that their decision is based on what they decided was best for their child and living situation.

So the decision to use cloth vs disposable diapers is ultimately going to be determined by your particular living situation and your personal beliefs.

Pregnancy from start to finish is stressful, not to mention, the current stresses imposed by the pandemic.

During and after pregnancy, you will be faced with many choices.

If you do your research, you should ultimately do what YOU want to do.

1. Are cloth diapers worth it?

This is a general question that is frequently asked by new parents deciding whether to use cloth vs disposable diapers.

Unfortunately, as we hope this article has demonstrated,  the answer is … it depends!

There are three main factors that impact the decision:

2. Do you really save money using cloth diapers?

There have been many studies comparing the cost of cloth diapers compared to disposable diapers.

The savings can vary a great deal depending on the cost of the diapers and the cost of your utility bills, including water/sewer and electricity.

Though some have estimated a savings of $1.50 to $2.00 a day for cloth diapers, how cost-effective cloth diapers are vs disposable diapers really has to be determined on an individual basis.